Showing posts from 2017
Show all

Wow, Aircon So Cold After Cleaning

- December 23, 2017
Just now playing games and heard dripping sound, then realise the aircon dripping water, lucky discover fast if not the room all wet. Now book aircon servicing, think the water cannot go out to the pipe, somewhere must be choked. I guess tonight cannot turn on, good thing I have a living room aircon, now it become useful lol, hardly use it at all, only sometimes got people come then turn on otherwise just idle there.
Post a Comment
Read more

Honestbee Delivery Not So Honest 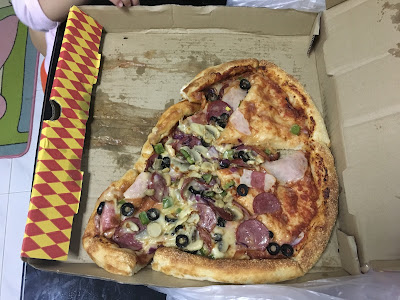 So today saw their promotion, first order get $12 off, didn't know they got send food, anyway $12 cheaper why not. And then they kept me waiting for almost one and a half hour, on the website quoted less than an hour, but late never mind, sometimes I order from foodpanda or kfc or any other delivery they also late but at least the food arrive in acceptable condition, sometimes the delivery guy also apologised, most of the time don't, but who cares as long as the food arrives. But this one the round pizza become triangle pizza, obviously somebody must have drop or carry the pizza sideway, who the hell carry a pizza sideway. Wife told me the delivery guy head bow down as if do something wrong, he just pass the box to wife and went off, didn't see the face. Then I opened the box and saw the triangle pizza, immediately take photo and complain via their online chat function, at least their customer service quickly apologised and waived the cost. They say want to give me $1
Post a Comment
Read more 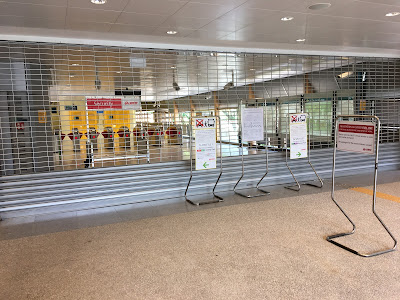 Checked my mailbox got a letter from them, just need to bring to the supermarket and show ID card. $100 voucher as good as cash because can buy groceries, very useful. On the way there also noticed that the train station is closed in the day, first time see such a scene, damn jia lat now.
Post a Comment
Read more

- December 11, 2017
First day very slack, morning only clear all the emails, nobody disturb me, then boss told me now put me in a more technical position which I'm ok with, actually I still prefer to do technical stuff rather than deal with users and get requirement which can be very tedious, sometimes very simple things they like to stir until like super big issue but end up also simple code change. So once first day over, the rest should flow naturally, always difficult is the first day or first time, actually like it or not still have to work, not much choice, then this job so good where to find. Oh by the way today a staff from Sheng Siong called me during lunch time, she told me I won a $100 lucky draw and confirmed my home address so they can send me the letter, so heng, I think in my life this is my second time kena lucky draw, first time was at a company event, some cheap prize though, think it was a pen or something. First day at work win lucky draw lol, sibei heng.
Post a Comment
Read more

Until we will become dust - Oyster Mask | THE MASK SINGER 2 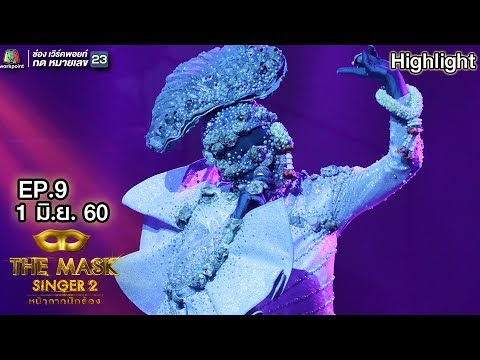 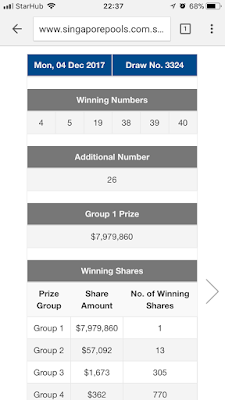 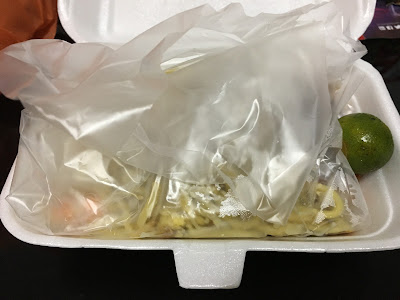 It is at ABC Brickworks Market & Food Centre, very power, hawker food is the best, cheap and good.
Post a Comment
Read more

What a Strange Day

- December 04, 2017
Just now went to market to buy lunch for wife and myself, reached there and walked towards the escalator, somebody on top spit and kena my right foot, very sticky shit, I quickly looked up but can't find that person, can't tell also because too many people walking on top. Went to toilet good thing have toilet paper to wipe. After I bought the food, on my way home walking have one big cockroach speed towards me and climbed onto my right foot, I saw it but only when I put my foot down then so zhun climb onto my foot, the creepy crawly feeling really got to me and I one kick until my slipper fly away lol. Then still on the way home, noticed the ground is wet, like one side wet another side not wet, I think it rained but not all areas wet? Weird because on my way to the market never rain, after I come back then notice ground wet. Finally reached my block, then saw this big bee or wasp flying near me, black red black stripes, I quickly siam in case it sting me, one trip to the
Post a Comment
Read more 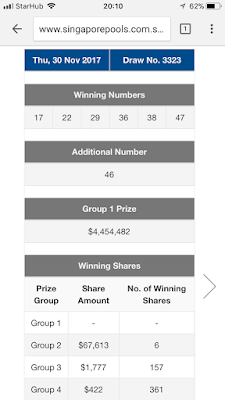 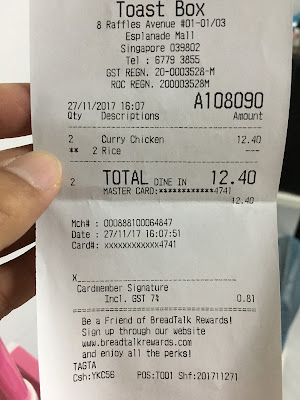 Monday went to Marina Square and had lunch at Sakae Sushi, bill came and realized they didn't charge me for 2x chawanmushi and 3x takoyaki so I went back to pay. After that then realized there is one more salmon karaage also never charge, lazy to go back again so took it as a discount for me being honest, anyway it's just $2.39 or about $2.80 with tax and service charge so not really a big amount so I don't feel so bad. The guy who seems to be the supervisor said only got people tell him overcharge, I'm the first who told him undercharge lol. Anyway thought I would buy 4D with the bill since it is good karma, end up buying with the wrong bill because on the same day also went to Toast Box to buy their chicken curry, their curry chicken sucks by the way. So I bought 1080, 8090 and 1240, the 1080 open starter and I won $250 lol.
Post a Comment
Read more

- November 28, 2017
My lower left back ache comes and goes and today suddenly got worse, can't even jog properly, not really sure what is the cause, at first thought it is kidney problem but don't have any of the symptoms, just ache at lower left area, I thought by sleeping on a good mattress it will help but not so much. So just now after my jog, I googled some yoga moves for lower back pain, the pigeon pose helped a lot, after doing it I can feel my blood flowing to my left side, my left leg, wow, I did for both legs. Now feel so much better. If you have lower back pain can give it a try first before seeing a doctor.
Post a Comment
Read more 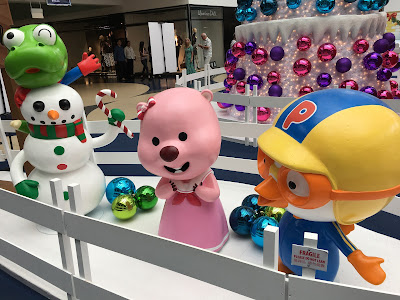 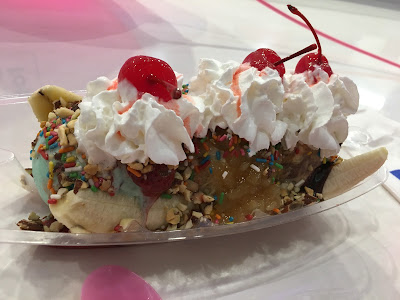 Went down to VivoCity, they moved to B1 (can only go down from the fountain side), last time they were at level 2 if I remember correctly. Good thing about this Starhub shop is they have many counters so don't have to wait very long, last time at level 2 also many counters. So my wife have a $50 re-contract voucher, and we trade-in her iPhone 6s Plus for $350, the iPhone 8 Plus costs $750 with the XS plan ($48 monthly), so end up paid $350 for the new phone, think still ok la. The iPhone 8 Plus 64 GB at apple shop is $1308. Actually yesterday then I know Starhub accept trade-in, last time don't have, and their price seems very competitive. I did a quick check online range is $330 to $350 for 6s Plus, Starhub take for $350. By the way there is a small scratch off the casing at the top, but Starhub check already still give me $350, I think if go ah beng shop likely they will cut $20-$30 for that scratch. One more thing is I noticed that if buy the phone online at
Post a Comment
Read more

Starhub Sim Only Versus 2-Year Plan 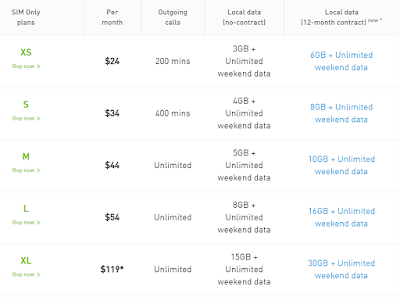 Sim only plans XS to XL Sim only plan Lite XS to XL Lite Plan with iPhone 8 64GB iPhone 8 64GB $1148 Compare Seems like Lite, XS and S is cheaper if sign with 2-year plan, M or bigger is cheaper to get sim only and buy phone separately. The sim only seems to be great savings if you already have a phone, so I think if can find lobang for cheap phone, then just get sim only is the best way to save.
2 comments
Read more

Today 18th Day of Not Working

- November 24, 2017
Now starting to get sian already, rest too much also sian, the feeling of reduced income is getting me lol, sigh, in SG no money no talk and that's a reality. So early next month will be going back to work, now a bit looking forward, rest one month plenty of time to relax and think about many things and what is clear is no choice must keep working whether I like it or not. Anyway boss mentioned say want to promote me, wah really scared man, job scope will get bigger phew. Actually junior staff the best, give one task do one task and just worry about one task, the higher the position the greater the responsibilities.
4 comments
Read more 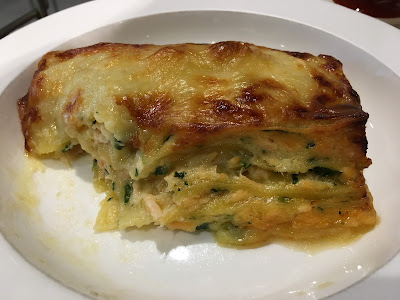 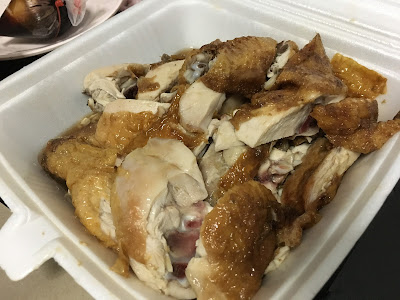 - November 20, 2017
I changed $749.90 for 18170 Baht, after the trip  still left with 6000+ Baht (wife gave 1000 Baht tip to the uncle who drove us to airport), didn't spend as much as I thought, think because we didn't really go all out to explore, have baby also not easy. So what we did was bike around, go 7/11, go markets, go tour around resort, go beach, go see the private housing, think want to buy haha, really nice place. If possible I think can buy a house there, one near airport would be perfect, SG fly there only 1 hour 40-50 minutes.
Post a Comment
Read more 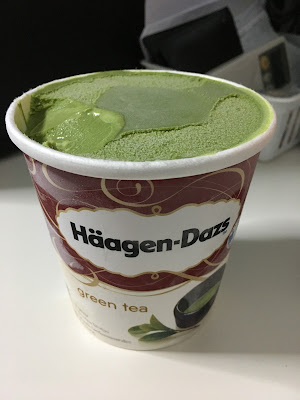 Now Sheng Siong have promo buy 2 free 1 royal milk tea flavour, I bought 4 then free 2, wah eat until shiok, open already cannot stop eating lol. Don't know how they make but it taste superior than those normal marigold or f&n ice cream, those taste fluffier but haagen-dazs taste more condensed, thicker, it's like they squeeze all the ingredients into a pint.
Post a Comment
Read more

- November 20, 2017
I started trying out Grab, damn easy to use, interface is very well-designed, no wonder so many people using. Compared to the Comfort app this feels more "young", confirm lots of younger people rather use this app than Comfort. If Comfort can redesign their app to cater to the young generation then better, if not eventually sure lose out. So now Grab have promo from 20 to 26 Nov, just enter SAVE3 to save $3. Just now I took $12.20 only have to pay $9.20, still got rewards points some more, then paid by Mastercard still have some rebate, wah so good.
Post a Comment
Read more 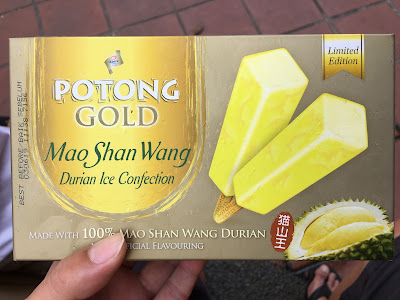 I bought one box of 6s for $15.80 at Fairprice. Quite nice, I don't really like durians but ice cream is ok. Actually the normal King's durian ice cream taste better, this one a bit dry kind of taste but still acceptable. Pricy.
Post a Comment
Read more 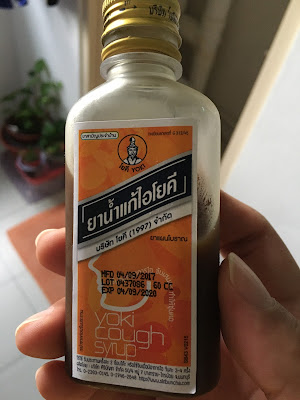 This one bottle I think 30+ Baht, damn good, drink one day my cough gone. Unfortunately only left two bottles at the store if not I buy more.
Post a Comment
Read more 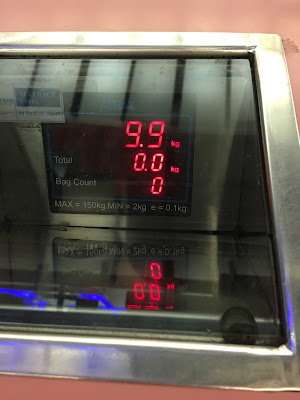 Definitely the best place I have been to for holiday, it is also a good place for retirement, I am considering getting a house in Phuket.
2 comments
Read more
More posts